Once upon a time in the world of make-believe, there were four boys who were best friends.  SO and MI – RE – DO.

SO was the tallest.  He was always much taller than the other boys were.  Next was MI then RE – and, finally, DO was the shortest boy.

​The boys lived near each other in the same neighborhood and attended the same church and the same school.  They loved playing together whenever they had the chance.

These are Curwin Hand Signs

In their neighborhood was a vacant lot.  The boys would meet there in the afternoons as much as possible.

In the real world, have you ever played on a vacant lot?  What did you like to do?

Sometimes SO and MI – RE – DO played baseball on the vacant lot.  Other times, they rode their bikes on a trail they had made.  They even tried to dig a hole to China but it took too long, so the boys gave up.

Girls were never allowed on their lot, and the boys would throw dirt clods at any girls who tried to join them there.  Once, a big truck dumped a huge pile of dirt on the vacant lot.

SO and MI – RE – DO played “King of the Hill.”  They also dug into the pile of dirt and added scrap lumber to make a fort. 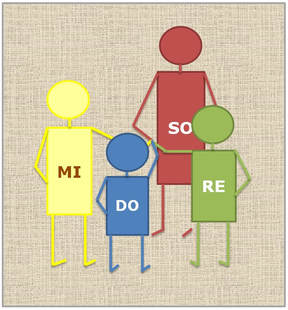 SO and MI – RE – DO pledged that they would be best friends forever. 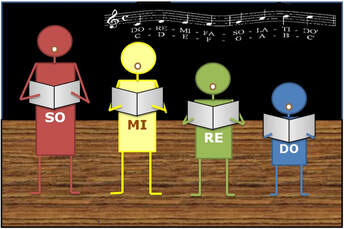 In the world of make-believe, SO and MI – RE – DO grew older and went to the same high school.  They played sports.  What sport do you think each boy liked best?

They also liked singing and playing instruments, so they were in both choir and band. 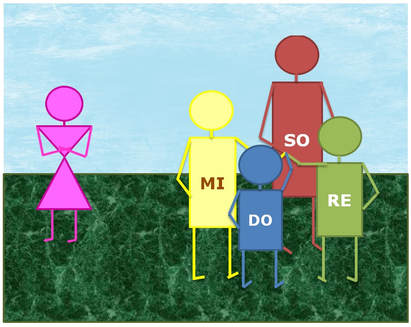 When old enough, each boy got his driver license.  They began to drive cars and to go on dates with girls.

For a time, all four boys liked to date the same girl. This caused so much trouble among the boys that they almost stopped being friends!

Before long, they decided that their friendship was more important than the girl was, so they stopped dating her.

Even after high school, colleges, and different jobs in different towns, SO and MI – RE – DO still wanted to remain best friends. How do you think they kept in touch with each other?

Sometimes they visited each other during vacations, especially at Christmas.

To Part Two for more of the story.
Powered by