In the world of make-believe, MI was worried about his FAther, who was getting very old.  MI and his wife sat at the dinner table to talk about FAther. Their talk went something like this:

MI: “We need to talk about FAther. Ever since Mother died, I have worried that FAther does not take care of himself.”

MI’s wife: “I know what you mean.  I am worried about him, too.  We have no way of knowing whether he eats well or if he takes his medicines.”

MI: “Right.  I am also afraid that FAther might fall and hurt himself.”

MI’s wife: “FAther might drive his car somewhere and get lost. Or worse, he might have a wreck!”

They thought about ways to care for FAther.  Finally:

MI’s wife: “I have an idea!  We still have the vacant lot next door, but children don’t play on it any more.  Why don’t we build a house there for your FAther?”

MI: “You won’t mind if my FAther lives that close to us?”

MI’s wife: “Not at all. As a matter of fact, I think we should build his house so close to ours that we share a wall!”

MI:  “That is an great idea!  Then, we could just open the door, take a half step inside, and see that FAther is all right!”

MI did build a house for his FAther. 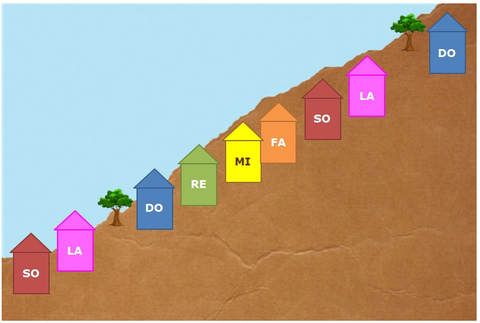 In the world of make-believe, FA was the new house on Melody Street.  In the real world of music, the pitch FA is a half step higher than MI and a whole step lower than SO.

Another name for half step is minor second.  You already know that a whole step is also called a Major Second.  An interval of a minor second is always smaller than an interval of a Major Second.
In the world of make-believe, DO and High DO saw that MI had built a house for his FAther.
DO and High DO wanted to do the same for their Aunt Low TI and Aunt TI.  Look and see! 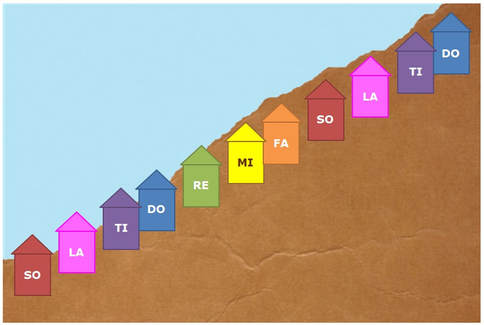 In the world of make believe, Low TI and TI were the new houses on Melody Street. In the real world of music, the pitch TI, is a half step lower than DO and a whole step higher than LA,.  Can you tell that TI is very close to DO' and a step from LA?

Looking at Melody Street, name all the half steps, or minor seconds, and all the whole steps, or Major Seconds.  Remember that a minor second is always smaller than a Major Second.  Can you find the Major Seventh from DO?
Music that includes all the half steps and whole steps of Melody Street is called diatonic, because dia- means through all and -tonic means pitches.

When diatonic melodies end with DO as the tonal center, the music is said to be Major.  Most of our music is Major. We hear lots and lots of music that is Major, and we are acustomed to its sound.  Here are songs that are Major: Alouette, Animal Fair, Bingo, Buy Me Chocolate, Clap Your Hands Together, Cobbler Cobbler, Cripple Creek, Cut the Cake, Deep and Wide, Do Your Ears Hang Low?, Down in the Valley, Dry Bones, Father Grumble, Hallelu Hallelu, Hey Diddle Diddle, If You’re Happy, Jacob’s Ladder, Jubilate Deo, Kookaburro, Let’s Go a-Huntin’, Little Red Bird, Oh Be Careful, Old Blue, On Top of Old Smoky, The Paw Paw Patch, Pick a Bale of Cotton, Pizza Hut, Rise Up Children, ‘Round and ‘Round the Village, Sarasponda, The Sow Took the Measles, Sweet Betsy from Pike, There’s a Brown Girl, This Little Light of Mine, Three Blind Mice, What Shall We Do on a Rainy Day?, Tideo, Who Did Swallow Jonah?, and Yankee Doodle.
When diatonic melodies end with LA as the tonal center, the music is said to be minor.  Sometimes, music that is minor sounds sad or strange to us.  Some minor songs are: Drill Ye Tarriers, The Grey Goose, Johnny Has Gone for a Soldier, Old Abram Brown, Raisins and Almonds, and To Work upon the Railway.
Melody Street and its eleven pitches are only part of the music story.  There are many, many more pitches in music. Voices and instruments have many pitches.  For example, the piano has 88 pitches on 88 keys.
Pitches go on and on like numbers and years go on and on.

There are sounds and melodies all around us.

Remember Melody Street and have a very musical life!
Powered by