In the world of make-believe, SO and MI began working for the same company in the same town.  Each was married and had begun a family.  In fact, MI married the girl from their high school days.

Together,SO and MI decided to help the town develop a new street.  They bought three lots on the newest street that was called Melody Street. 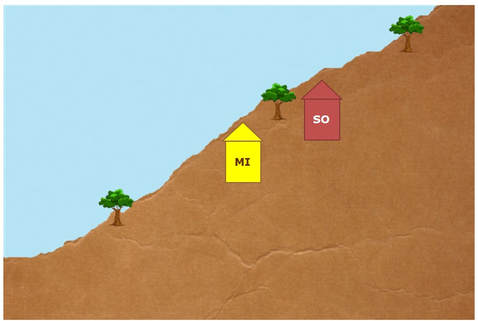 In the world of make-believe, MI and SO were two houses on Melody Street. In the real world of music, MI and SO are two pitches that make melodies and harmony.

Music made with these two pitches is called bitonic, because bi- means two and -tonic means pitches. Some bitonic songs are Cuckoo, Hickety Pickety Bumble Bee, Lemonade, Quaker, and See-Saw.

Since going from MI to SO or from SO to MI means skipping the vacant lot, the space from one to the other is called a skip. SO is always a skip higher than MI, and MI is always a skip lower than SO.

When a new house was built on Melody Street, MI and SO wondered what their new neighbors would be like.  In the real world, what would you want to know about new neighbors?

Soon after LA and his family moved into the new house higher than SO’s house, everyone on Melody Street had a picnic on the vacant lot.  LA and his family were very friendly.  All the children liked each other!

In the world of make-believe, LA was the new house on Melody Street.  In the real world of music, MI – SO – LA are three pitches that make melodies and harmony. 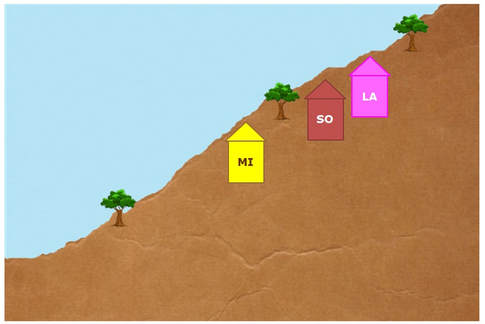 Since the distance between MI and LA is bigger than a step or a skip, it is called a leap.

Most small children sing these three pitches before any others.  Do you remember singing this little song?

There are many folk songs and children’s songs that can be sung using MI – SO – LA. Some are A Tisket A Tasket, Bell Horses, Bobby Shafto, Bounce, Bye Baby Bunting, Doggie Doggie Where’s Your Bone, Goodnight Sleep Tight, I Like Music, It’s Raining It’s Pouring, Little Sally Water, Lucy Locket, Nanny Nanny Boo Boo (see above), Rain Rain, and Snail Snail.
To Part Three for more of the story.
Powered by